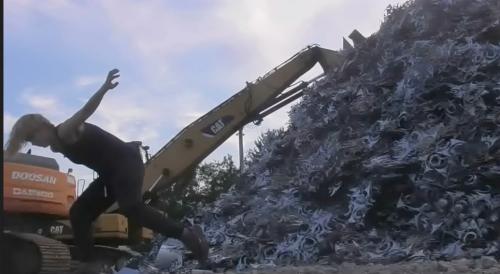 Heidegger's Indiana is 12-part digital music-theatre-video-philosophy project in progress. A first, raw version was released through The Exponential Festival, January 2021.

Videos may be experienced individually as they are released December 1, 2020 - January 20, 2020, an edited single work on January 28, 2021, and together via a playlist on PPL's YouTube Channel (HERE) afterwards. Listen to just the opera on bandcamp.

Heidegger's Indiana is a disintegrated treatise on the desirata of conceptualizing meaningfulness in the face of Nihilism, which Heidegger calls "a historical movement, and not just any view or doctrine advanced by someone or other. Nihilism moves history after the manner of a fundamental ongoing event that is scarcely recognized in the destining of the Western peoples." [1] Through layers of found footage, stacks of citations, and the dense physicalities of social isolation, 12 videos mark and unmark passages, stare (back) into the arbitrary terror(ism)s of Midwestern rural whiteness and Euro-phallic philosophy, and theatricalize disessentializing (Verwesung, decomposition + deposing of the suprasensory world and its "essences") towards (non)enduring in particular, ethos-and-eros-driven ways.

[1] Heidegger, Martin. 1977. "The Word of Nietzsche" in The Question Concerning Technology and Other Essays. Translated by William Lovitt. New York: Harper & Row. p. 62