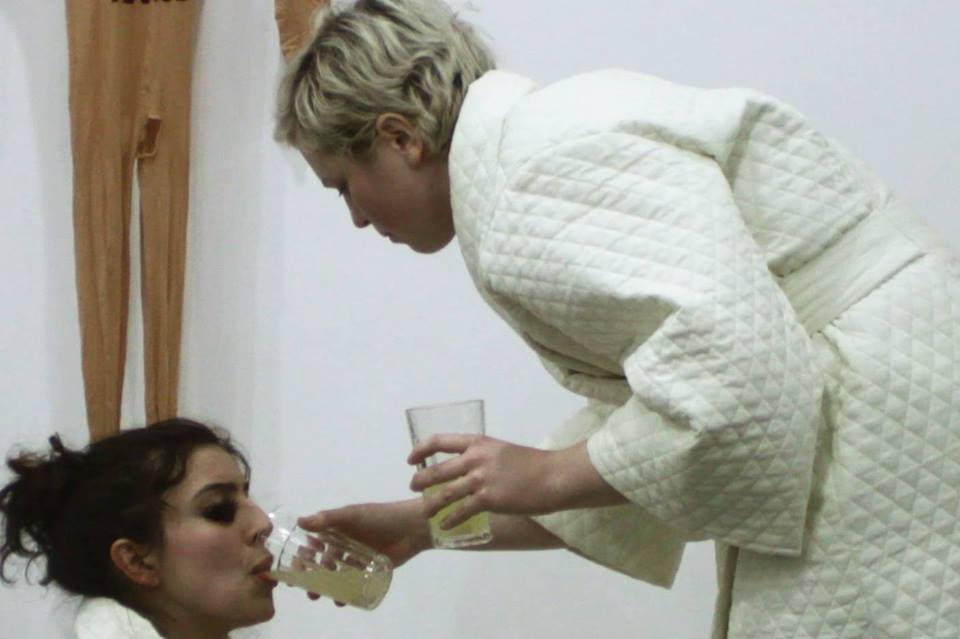 Mothergirl is a performance duo living and working in Chicago, IL. Our work has taken the form of installation, durational event, and guided audience interaction. The work frequently uses humor to deconstruct and render absurd various tacitly held ideals that we (Katy and Sophia) encounter in our own lives. These performances relate to consumerist impulses, feminist and feminine tropes, and/or to the dynamics of a mutually caring relationship.

We intend each piece as a humble offering. We consider incidental audience as well as the gallery going public for each work: who encounters the work and how they are engaged.

Mothergirl has performed at Rapid Pulse International Performance Art Festival, MCA Chicago, AUX Gallery (Philadelphia), and Mobius (Boston). We are the founders and hosts of Bits and Pieces: A Monthly Salon for Ideas and Experiments. We were 2012 ACRE Residents and 2013 Chicago Artists Coalition HATCH Residents.

We are a pair of theater makers, writers, and set designers from San Antonio, TX, currently artists in residence at Flux Factory in Queens, NY. Since co-founding the performance collective The Aesthetic of Waste in 2012, we have directed and designed several theater productions and performance installations, including We Stole This and The Most Important Night of Theater You Will Ever Attend. Our collective came together through our shared interests in the collaborative process and satire.

We will be presenting a preview of our upcoming show, The Tulsa Swinton Variety Hour, which will be presented at Flux Factory on July 9-10. The show focuses on the eponymous twin sister of Tilda Swinton and the final production of her long-running television program. Tulsa must confront her sister's childhood disappearance at sea, her own upcoming death, the coincidental upcoming deaths of all her collaborators, and the History Man with the Whip, a fact-checking madman who haunts the Pepsi-Kinsey Film Studios. The preview for Panoply Lab will feature testimonies from the only surviving cast members, Junior Production Assistant Alyssa Bergstrom and Senior Production Assistant Alyssa Bindlzorts. Written by members of the Aesthetic of Waste and featuring artists from Flux Factory.