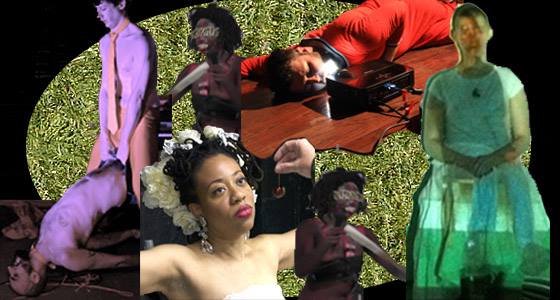 Durational, looping, dual, excruciatingly precise; presence is maintained and contained to the space but time itself is altered by the tension between the performing body and those witnessing and by physical, psychological, and emotional pain, strength, and focus.

A.E. Kingsmill: "Since moving to London in 2009 to study I have been exploring its underground scene in tandem with feeding my artistic practice. Here I have been able to cross fertilise queer imagery with fine art aesthetics to create arresting endurance works which solicit the body as a platform and often use dressing as a form of three dimensional surrealist collage. As a recent graduate in Fine Art at Central Saint Martins I have performed at Franko B's Untouchables at Mori and Stien gallery and at Peep Anatomy at Edinburgh Fringe. I have performed at the infamous Torture Garden Club and presented my paper, Pervarts along side Annie Sprinkle at the Performing Porn symposium at Performance Space." http://aekingsmill.carbonmade.com/

Born in Cleveland, but raised on the South Side of Chicago, Ayana M. Evans was given a strong sense of Midwestern American culture, which still influences her art making practices today, either as ideals she challenges or as nostalgia for histories she cannot re-create. After receiving her MFA in painting from Tyler School of Art at Temple University and her BA in Visual Arts from Brown University, Ms. Evans moved to New York City where she now resides as an installation/performance artist and accessories designer. Ms. Evans relational performances and installations collaborate in acknowledging, collecting, and creating evidence of her ‘self’, which is often registered to socio-political context; presented as critical or banal queries that involve her body. http://www.ayanaevans.com/

Philip Fryer (Born 1981, Boston MA) is a Boston based artist who explores concepts of mortality, chaos and order, the body as a circuit, and the omnipresence of sound. He works primarily in performance but also utilizes noise, video and installation in his work. His recent exploration has been focused on using lo-fi technologies such as circuit bending and cassette tape loops, both as individual pieces and as elements of performances. Philip is a co-founder of The Present Tense, an initiative that has organized performance events since 2005 and has exhibited the work of over 200 artists. He as also been a member of the Boston based dark ambient project TOOMS since 2012, and performs under the solo moniker Moondrawn. http://PhilipFryer.com

Forged from the figurative beauty that dance and movement provides, FUTURE DEATH TOLL introduces movement, light, sound, rope, markers, fire, sweat, haircuts, phone calls, and flags as a metaphorical stand-in for issues like mortality, death, diseases, prison as a corporation, intellectual property rights, bdsm, and subjective destitution. Pondering questions like: how do we talk about performance art? how can we all hear each other? is silence important? how far does our voice reach? how can we make performances with people not in the same room (would that also work for several performers in several different places)? how can this engage the public? what’s the most minimal amount of material required to conceptually encapsulate the relevant point? how are we going to schedule and choreograph all of this? So in attempt to find some answers FUTURE DEATH TOLL has been writing software that allows for transparent multimedia collaboration amongst a small community of collaborators both near and far. Answers become fodder for group collaboration and idea exchange through tools like open forum discussion, a/v recordings, and video chat. Reading poetry together provides a preemptive meditation that does not exemplify any individual. Black trash bags, heavy breathing, sweat, hair clippers are objects of ephemera & appropriated context; which may or may not be (or become) transcendental; which may or may not be well crafted; which may or may not really exist. http://f-dt.com/

Will our special guest come?