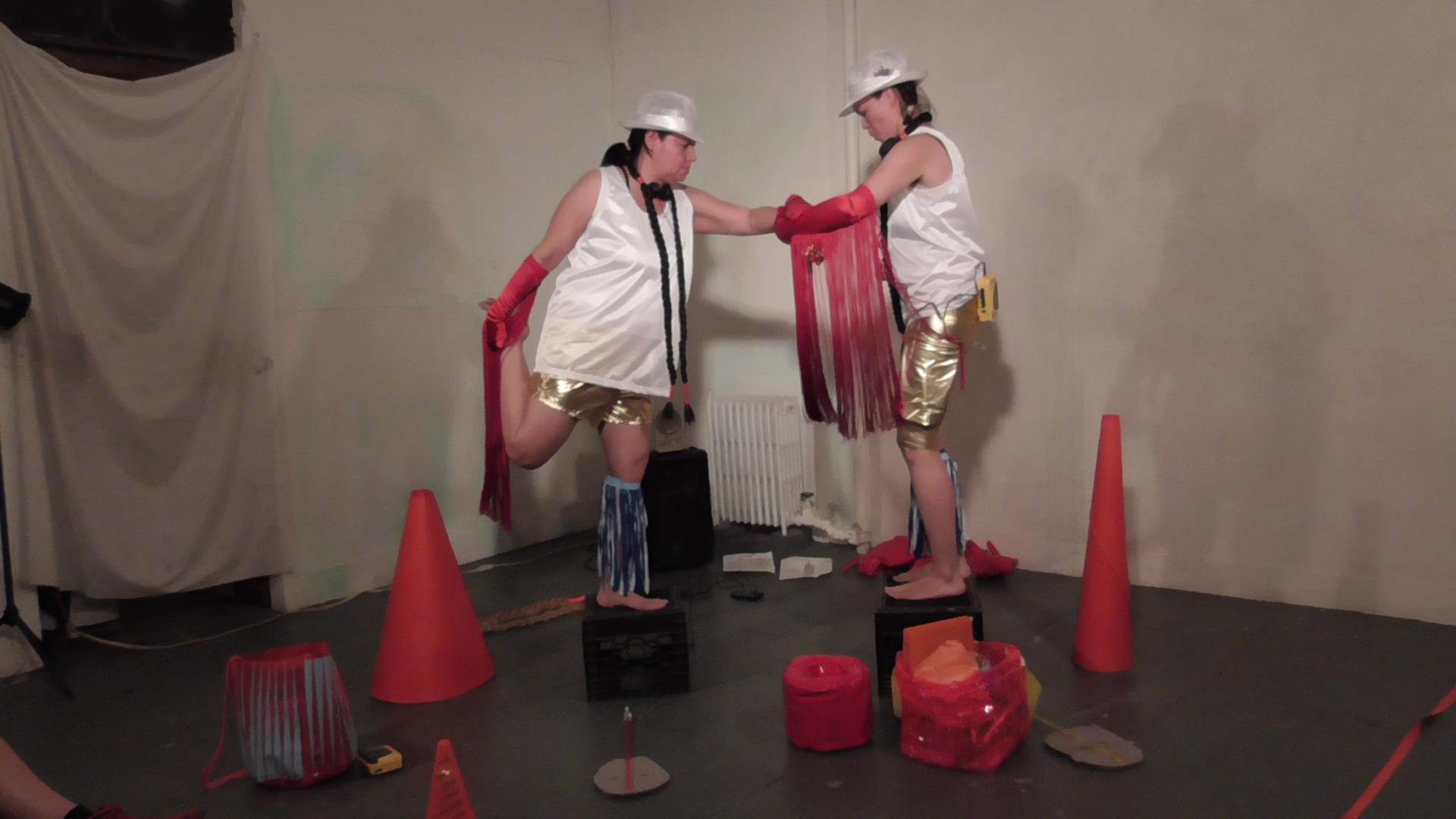 Hupfield and Vickers present Vestige Vagabond (VV) a mash-up of unexpected visual references and interactive experiences. Using items worn and carried on the body the artists perform and occupy economic and cultural sovereignty through a combination of choreographed movement and free demonstrations. Creative ingenuity and cultural survival mix with humour and animated objects to reflect the strength and adaptability of the human spirit. Charlene Vickers and Maria Hupfield live on opposite coasts and met via Rebecca Belmore in Vancouver BC at Grunt Gallery in 2007. Vestige Vagabond was developed for the Not Sent Letters Project by Jeremy Todd, 2010, and commissioned for The 2011 Annual Santa Fe Indian Market by Ryan Rice, Curator at the Museum of Contemporary Native Arts, Santa Fe NM as programming for the exhibition Counting Coop. VV will perform at street level during MANIFEST! Choreographing Social Movements in the Americas, Encuentro Hemispheric Institute, Montreal 2014.

Charlene Vickers is an Anishnaabe Vancouver based visual artist since 1990. Her paintings and sculptural installation are known to search the edges of performance and video to explore how memory, healing and ties with ancestral lands can be achieved through bodily gesture and archival images. Charlene’s work has been exhibited in solo exhibitions in Canadian artist run centres in Vancouver, Winnipeg MN, Richmond BC, Bowmanville and Peterborough ON. Vicker’s beer case and denim mixed media moccasins have travelled to NYC, Amsterdam, Anchorage Alaska and Santa Fe NM. She completed her MFA at Simon Fraser University and is on the Board of Directors at Grunt Gallery in Vancouver, BC. http://www.charlenevickersvisualartist.blogspot.com/

Maria Hupfield is based in Brooklyn New York and a member of Wasauksing First Nation, Ontario Canada. Hupfield is a 2014 recipient of the Joan Mitchell Foundation Painting and Sculpture Grant and the AIM residency at the Bronx Museum. In 2013 she performed “All is Moving” in response to the paintings of Artist Jaune Quick-to-See Smith at Accola Griefen Gallery, Chelsea NY and participated in A Conversation on Performance Art: Women Redrawing/Performance, organized by The Feminist Art Project at SOHO20 Chelsea NY. Hupfield has performed at BIPAF, and 7a*11d International Performance Festival. Her project “An Artist Tour Guide” was commissioned by The Smithsonian’s National Museum of the American Indian, New York. Work from her performance Ghost Trophy can be viewed in Body as Omen, Ortega y Gasset Projects, Brooklyn until June 28th. http://www.mariahupfield.com/