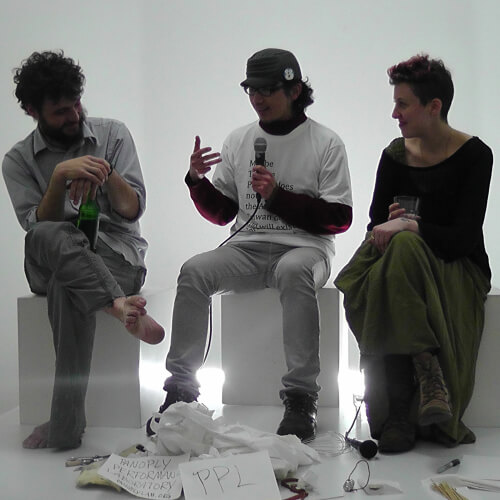 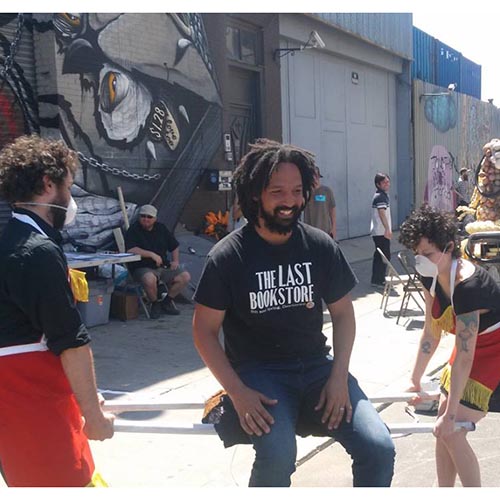 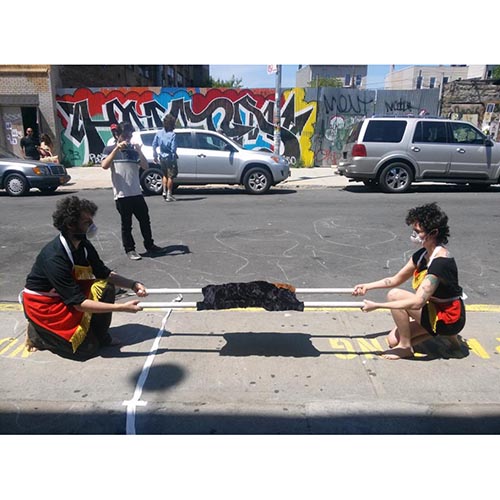 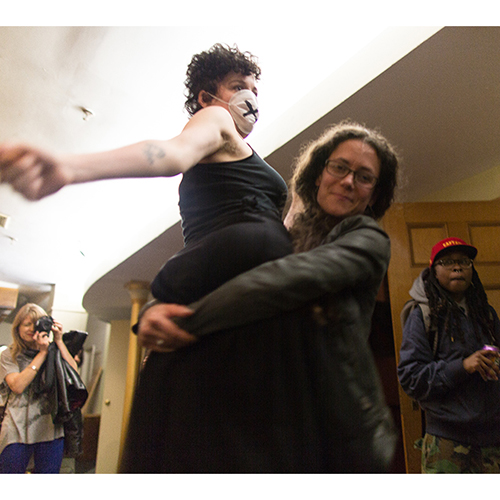 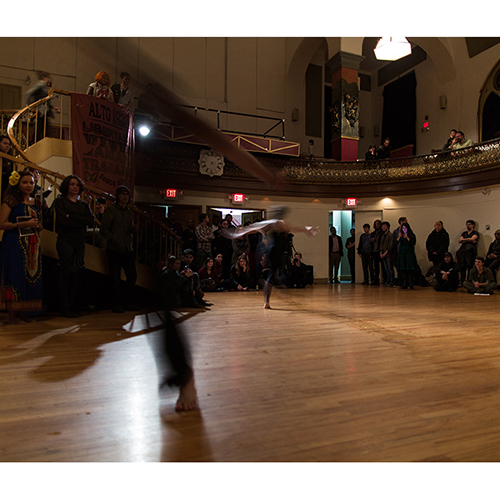 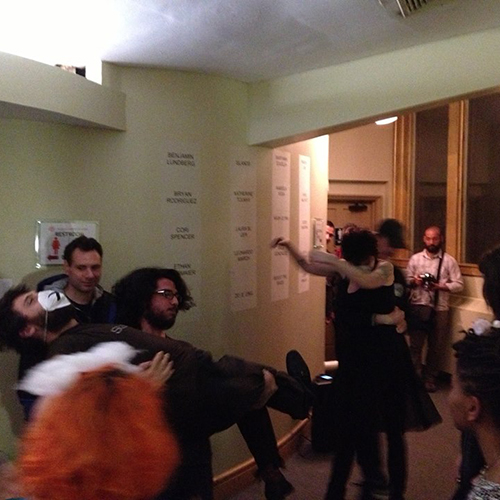 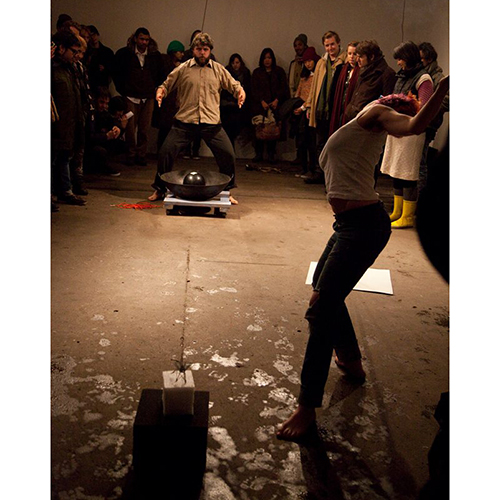 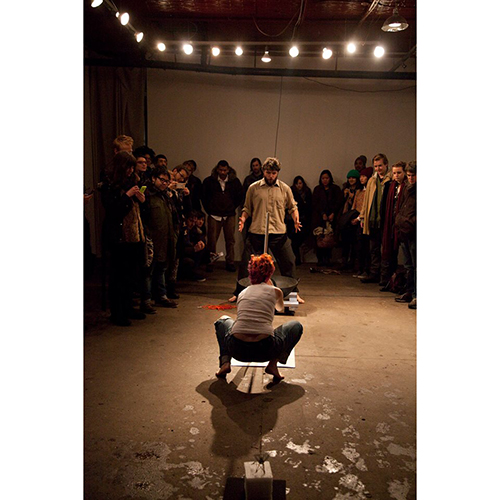 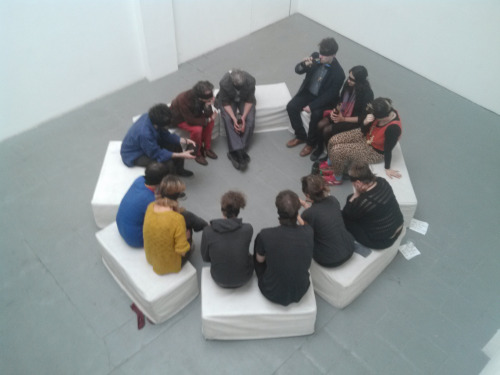 PPL’s performative group discussion during the exhibition we curated as a PERFORMANCY FORUM for Month of Performance Art - Berlin (ANTHOLOGY 2015) entitled “Sounding the Alarm: Theories of the Anti-Sight.”

“Performance artists, conceptual social workers, and performance-based spiritualists and scientists attempt to break through the sound barrier of cultural imperialism, violence, and hegemony. Doubting the fundamental conception that “seeing is believing” within a reality where forms of sight and what is seen are dominated by capitalist agendas, we develop sonic, sensual, and social interactions, disruptions, resistances, and reifications.”

What if our hobby (since we are such professional artists) was to go around on the street giving people rides on our homemade platform here? We lift up a lot of people and one dog on the street during Arts in Bushwick in front of Pine Box Rock Shop, curated as part of a public performance series organized by Spread Art. Sometimes other people lift us up, too, it is a good general hobby for a street fair.

3 actions accompanied by pre-recording noise pieces performed throughout the evening during the night of performance TODO BAJO CONTROL at LA GALERÍA at Villa Victoria Center for the Arts curated by Anabel Vázquez.

1.) performed as people arrived: esposibleparaustedcantarcongmigo gold paper covers two wooden signs worn around the neck, we rip off the paper and chew it, revealing two statements asking in Spanish if it is possible for "you all" to sing with "me" and if it is possible for "us" to sing with "you"
2.) performed suddenly between two other performance works: Crises of confrontation. Brian and Esther walk the longest path in the space towards each other, faster and faster, arms raising a little bit each time, finally we crash into each other, Brian slips on some egg from Benjamin Lundberg's performance, Esther hits her head (she is upside down) on the floor. Afterwards we continue to wear white dust masks with black X's over our mouths and noses.
3.) performed in the hallway as the crowd moves from the galaria to the large hall: can i pick you up? We open our arms, asking. We pick many people up, they pick us up, a celebration, laughter. Nobody is too heavy.

At English Kills Gallery PPL perform Abstraction is Mimetics, an attempt to abstract and theorize how complex ideas can be communicated between individuals, a new language of objects and self-assurance/arrogance. Styrofoam cubes in different sizes, giant wok and bowling ball, dangling mic, magnets, mirrors, kazoo, miniatures, poles, rolling platform, balls of fluff, little gold cards with symbols on them. Text: YOU ARE THE RIGHT PEOPLE, IN THE RIGHT PLACE, AT THE RIGHT TIME. Curated by Peter Dobill as part of the exhibition GROKNATT.

At Grace Exhibition Space, PPL use a homemade double skateboard with much difficult to lurch across the entire space from window to bar, vocalizing and physically trying to push each other off the board. We then climb to the ceiling and Brian sings “my name is burger, I rally the troupes, faring better than my neighbors, I pluck the rubble from my dishwasher, a fire is lit in a nearby pre-refrigerator, I love love love appliances and applications of any kind” into a mic attached inside a football helmet, launching a pot of boiling water on a pulley and yellow rope to Esther who drinks and douses herself, becoming pink and falling off the counter, running to fit and cool herself in the fridge. Brian exits the space. Esther stays in the fridge until she is rescued.

Esther Neff and Brian McCorkle perform at Liebig12 and AquaBit as part of (Con)Temporary Space Time, an exchange with Taiwanese artists during Month of Performance Art Berlin (MPA-B)

Esther Neff and Brian McCorkle test the will of those present to connect with one another. Tape-stages are created as meeting points, pairs of blindfolds with matching symbols are distributed, and sound-making household objects are provided to faciliate "call and response" actions connecting those with the same blindfolds. Sound in the room is also recorded and played back.

Brian McCorkle hides naked for the duration of the exhibition day under the rolling staircase. He drinks and eats in isolation and darkness, only emerging (surprise!) at the very end of the night. Meanwhile, in a 20-minute performance slot, Esther Neff uses metal and magnets to attached to her naked body and points of pain on the bodies of those present, attaching herself physically and attempting to share energies.

Performed by Esther Neff and Brian McCorkle on January 24th, 2013 at IV Soldiers Gallery. We begin standing by a fluorescent bug zapper, dark in the gallery. We stick magnets to the walls at certain heights, exit. The audience lets us in when we knock on the doors. We animate two 8′ heavy rubber tubes, making communicative sounds through them, then squares of magnets over our mouths and foreheads, we stick ourselves to it.

PPL @ Recession Art, day #6 of the 1st ever Salonukah, an 8-day exhibition curated by Anthony Tino & Laura Blüer. PPL begin outside with Esther on Brian's shoulders, holding a blue orb. We peer in through the window, then enter the gallery. Brian puts Esther in a black bodybag and tries to do something with a loop pedal but it doesn't have batteries. Esther gets super claustrophobic and comes out of the bodybag too soon, we then steal money and jewelry from audience members using magnets while a bowling ball distracts them. Something about magnets in the thumbholes of the bowling ball, roughshod.

Esther Neff and Brian McCorkle perform at Goodbye Blue Monday as part of ExperiMENTAL Fest 4 curated by Robert Pepper. We gather a lot of objects and make "coming" and "moving away" noise, looping all through one microphone until it is so loud that our speaker blows.