TIME: A Complete Explanation in 3 Parts 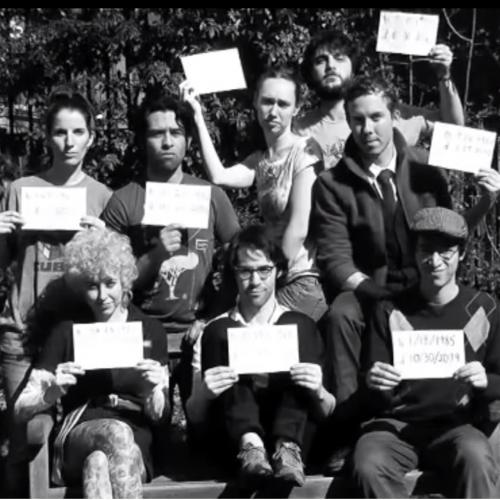 Exploiting the diverse and virtuosic skills of thingNY's and PPL's composers, actors, and multidisciplinary artists, the piece examines the histories, cultural role, and science of time through print, video and the performance of experiments and sequences created collaboratively by the two ensembles working as one. This hybrid of experimental music, video, performance, sound, and text forms an intricately mechanized "timepiece" telling of time throughout time, in real time, and sometimes just in time.

TIME: A Complete Explanation in Three Parts premiered at The Brick Theater in Brooklyn, NY on May 4 and had eight mimetic performances through May 14, 2011.

The work is influenced by the chance-based and aleatoric modes of the music of John Cage and Gerard Grisey, the durational modes of the performance art of Tehching Hsieh and Bas Jan Ader, the public theatre forms of the Berlinner Ensemble, the post-dramatic work of companies like KASSYS, and the philosophies and science of Nietzsche, Artistotle, Heidegger, Husserl, Einstein, and many others.

Some sections and experiments occur before, during, and after the live performance at The Brick, extending in time through the “Performance Book” containing the program, the entire 60-page script, references, keys, diagrams, rules for participatory games, the musical score of the work, as well as instructions for durational experiments, photographs, visual pieces, footnotes and a complete bibliography.