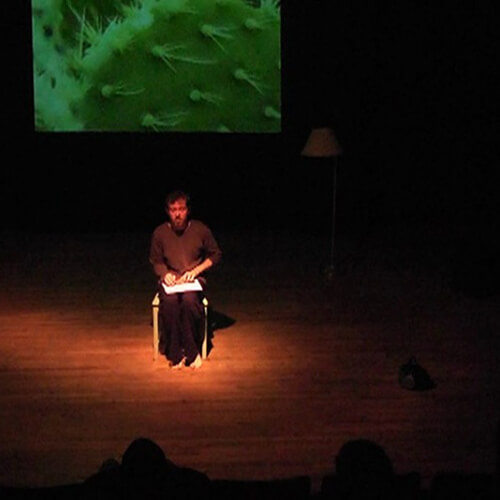 4 Women at the Edge of the Desert

Matthew Stephen Smith performs four women in this hyperbolic dreamplay that follows a small family through two days in the Anza Borrego Desert. As three characters attempt to take care of the fourth, a blind young woman named Mika Lynn, their relationships shift in patterns of reaction and anxiety. Written by Matthew Stephen Smith.

Under the direction of Esther Neff, and with a sound design by Brian McCorkle, the piece questions the nature of shared memory and the individual mind's ability to construct a livable reality.

A hysterically naturalistic piece about 6 individuals held hostage after an orchestra concert, by Matthew Stephen Smith, Directed by Esther Neff, at the Hudson Guild Theater and Produced by PPL as part of the Prospect Theater Company’s Dark Nights Series produced by Dev Bondarin

Amahlia is a play by Joel Shatzky, Directed by Esther Neff. Original music by Ben Tyree.

Produced at the 13th Street Repertory Theatre, 2006. A young journalist working to expose the U.S-supported dictator of her country learns the hard way that even those closest to her heart can be corrupted. Performed by Andrea Suarez, Liche Ariza, and Joe Lampe. Produced by Panoply Performance Laboratory.

In the Company of Eshu

Ghanaian performer Godwin Obeng stars in a film/sequence of performances at Eugene V. Debs socialist co-operative. Much of the work is lit by candlelight, the performances feature lots of make-up, torches, and drumming. We seek to discover whether or not a wrongful leader really can be deposed via performative ritual and the answer is either 1.) No 2.) Georg Bush is not a wrongful leader or 3.) our rituals aren’t powerful enough.

Mother Courage and Her Children

Mother Courage and Her Children by Bertolt Brecht, new music composed and performed by Brian McCorkle, adapted and directed by Esther Neff as her BFA thesis production. The Trueblood Theater, March 2006. Karenanna Creps as Mother Courage.

The Mineola Twins by Paula Vogel. Directed by Esther Neff, starring Chelsea O’Connor and Matthew Stephen Smith. The New World Arts Center, 2005. The team travelled to Goshen, IN to produce a student version of this work at the local theater, in collaboration with New World Players, Goshen Community Theater, and Goshen College.